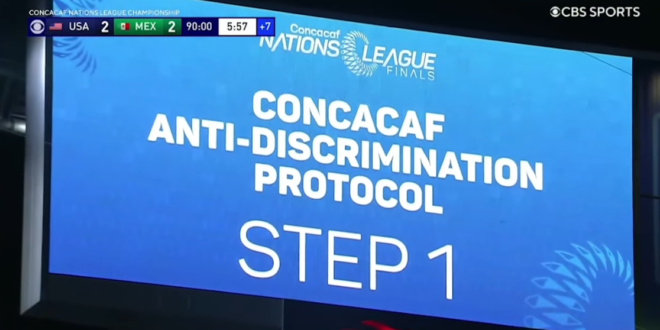 The CONCACAF Nations League final in Denver between the United States and Mexico was marred by unruly fan behavior that included objects thrown onto the field and a brief pause in the game because of fans using an anti-gay chant.

The pause occurred during the final moments of the second half before the game went to extra time in the U.S. men’s national team’s 3-2 win. Referee John Pitti resumed the match after three minutes as players on both sides pleaded with the crowd to stop using the chant.

Mexico has struggled throughout the years with stopping supporters from making anti-gay chants. In March, FIFA opened an investigation into anti-gay chanting by Mexico supporters during an Olympic qualifier against the Dominican Republic.

Read the full article. The clip is cued to the moment.