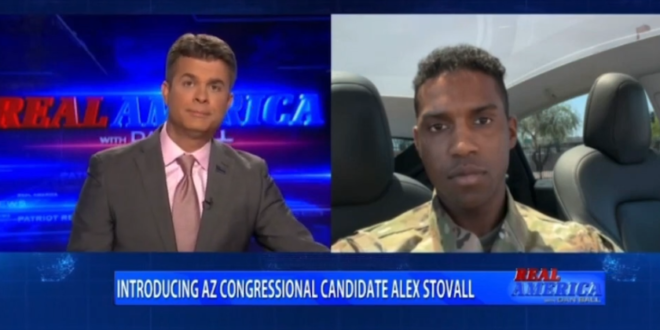 The Army is investigating a reserve officer who used photos of himself in uniform in an ad for his congressional campaign, conducted a campaign interview in uniform, and said he doesn’t think President Joe Biden is actually the president of the United States.

1st Lt. Alex Stovall, 26, says he is running to represent Arizona in Congress to “stop [Rep. Alexandria Ocasio-Cortez] and her cronies from taking over our congress and our country.”

The Republican’s campaign video features photos of himself in uniform, and, while in uniform, he conducted an interview with One America News Network, a right-wing news organization that has pushed election conspiracies.

Army officer running for Congress under investigation after questioning whether ‘sleepy guy’ Biden is president. By @halbritzhttps://t.co/mF374p8KLp

Previous Hate Pastor: Jesus Has Saved Me from China’s Genocide
Next Fox News Contributor To Speak At SC QAnon Event