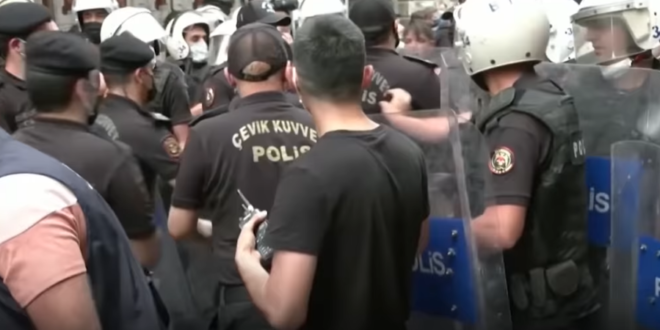 The march participants comprised several civil society groups that gathered under the motto “the street is ours.” Footage and photos of demonstrators showed some being pushed and dragged by riot police on Istiklal Avenue in the heart of the city.

After 100,000 people showed up for a Pride march in 2014, authorities in Istanbul banned Pride events citing public safety concerns. Authorities set up barricades to block the march Saturday ahead of time, claiming the march violates a law against protests that violate public “morality.”

The latest crackdown came during a withering year for gay and transgender people in Turkey, marked by increasingly strident official discrimination, advocacy groups said. Some of the loudest government denunciations came in February, when officials, including President Recep Tayyip Erdogan and Turkey’s interior minister, seized on student protests at a prominent Istanbul university to attack LGBTQ individuals.

“There is no such thing as LGBT. This country is national, spiritual and walking toward the future with these values,” Erdogan said during an address to members of his party that month, in comments that drew criticism from the Biden administration.

Earlier this year, the government also withdrew from the Istanbul Convention, a European Union treaty aimed at preventing violence against women, justifying the withdrawal in part by claiming that the agreement was “normalizing” homosexuality.

Riot police in Istanbul fired tear gas and blocked streets during a march in support of LGBTQ rights, detaining 25 people including a prominent photojournalist.https://t.co/SXefscWQ6W

This is what’s happening in Turkey today.

When people ask you why #Pride still matters, show them these #OnurHaftası pic.twitter.com/oPtUm82Pfw

Turkish police fired tear gas to disperse a crowd that gathered for a Pride parade in central Istanbul on Saturday, detaining some of those seeking to take part in an event banned by local authorities. Turkey June 26, 2021. REUTERS/Dilara Senkaya #Pride2021 pic.twitter.com/0eCODpw59p

Thousands turned up to celebrate LGBTQ #Pride in cities and towns across the world.

In Turkey, police in riot gear fired tear gas, blocked streets, and arrested more than 25 in an attempt to thwart the parade. pic.twitter.com/lcFztg60SC

“Riot police used tear gas and rubber bullets to disrupt the annual #Pride parade, intensifying a crackdown on the march at a time of rising government hostility toward #LGBTQ individuals in #Turkey.” @kfahim & @antoniafarzan‘s @nytimes piece:https://t.co/49NkXZoNku