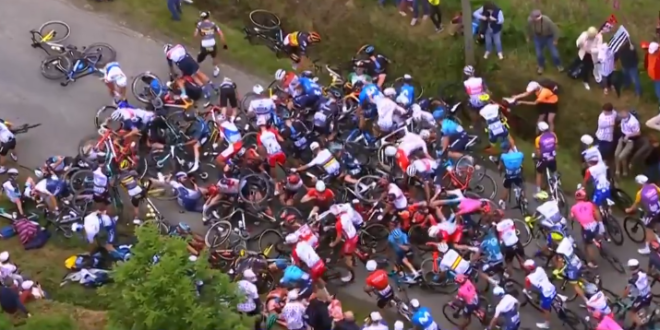 French authorities are looking for the fan who caused a bloody crash Saturday during the Tour de France — an incident punishable by up to a year behind bars — as the race’s organizers plan to sue the clueless sign-brandishing spectator, according to reports.

Prosecutors in Brittany on Sunday began an investigation to find the grinning, sign-holding woman who caused a gory pile-up when a cyclist clipped her sign, according to the Daily Mail.

The woman — seen in pictures hoisting a cardboard sign that read ‘Go! Gran, Grandad,’ in French and German — could face up to a year in prison.

A huge crash at #TDF2021 this morning was caused when a spectator held out a sign and struck a rider.

Jasha Sütterlin was forced to withdraw from the race due to an injury sustained in the crash, according to @LeTour. pic.twitter.com/XCcEjHRAGp