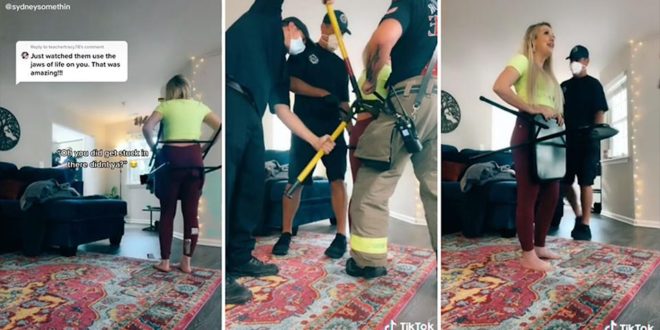 A 27-year-old Ann Arbor woman who teaches social media followers how to do sex acts and fetishes had to call firefighters for help after a sex stunt went wrong Tuesday, June 9.

Being stuck was the sexual fetish the woman was trying to demonstrate on social media, but this time she couldn’t get unstuck on her own. Firefighters responded to reports of a person stuck in a chair around 5:10 p.m., June 8 on Edenwood Drive, said Chief Michael Kennedy of the Ann Arbor Fire Department.

But this experience was unique, he said. At first, the third shift crew of Engine 1-6 found her stuck in a folding chair, as can be seen in a TikTok video.

Firefighters had to use the Jaws of Life—the same tool used to get people out of severe car crashes— to dislodge her from the chair.

“And ‘stuck’ is a fetish category that I’m pretty popular in and done for about nine years now. I was just working, and yeah… It was embarrassing, but probably the best stuck video I’ve ever made.”

Read the full article. This particular fetish is a new one to me and I’ve been to Folsom and IML.