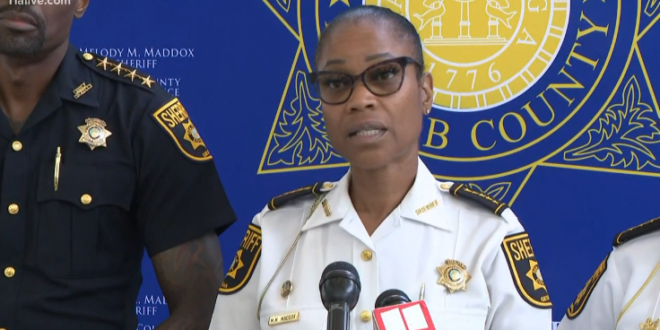 Authorities are on the scene of a shooting that left a sheriff’s deputy injured and a cashier dead Monday afternoon. A spokesperson said a DeKalb County Sheriff’s Office reserve unit deputy and two others – a man and woman – were injured during the shooting at the Big Bear Supermarket near South DeKalb Mall off Candler Road.

“Although details are not complete, authorities say that the male suspect was involved in a dispute with a young woman before he began firing at her inside the store,” the spokesperson for the sheriff’s office said. DeKalb County Sheriff Melody Maddox said the dispute started over wearing a mask inside the store.

The reserve deputy, who was employed as a part-time security guard with the store, intervened during the shooting and returned fire, the sheriff’s office said.

“He is a stand-out professional individual and he loves what he does,” Maddox said. “As you can see, he’s continuing to do what he does to make sure that everybody is safe, once again, as they go in and out of that store.”

The Georgia Bureau of Investigation was en route to the scene to assist in the investigation. The DeKalb County Police Department also responded.

There is still a huge, active scene at the Big Bear Supermarket after a DeKalb Sheriff’s deputy and 2 others were shot. People waiting outside say they have family members still in the store as GBI investigates @cbs46 pic.twitter.com/UXZDJEeRCp

Breaking: Female grocery store cashier shot and killed by suspect at Big Bear Market. Customers were inside the store at time of shooting.
Deputy officer shot twice by suspect.
Deputy is in stable condition.
Suspect was shot by the officer.#Decatur #Georgia #GroceryStoreShooting https://t.co/Sux9aIy7f1