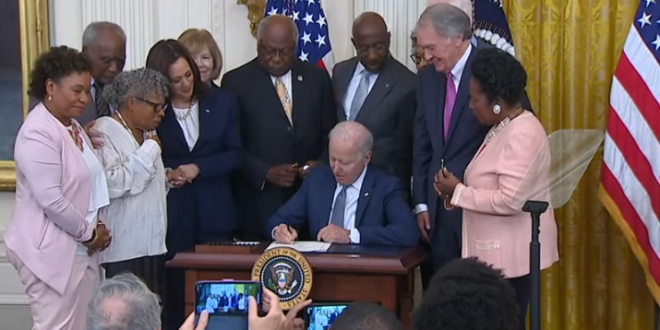 States across the country are scrambling to close their government offices Friday after President Joe Biden signed legislation establishing Juneteenth as a US federal holiday.

While June 19 — which commemorates the end of slavery in the United States — falls on a Saturday this year, governors across the country announced in quick succession a range of plans for their state offices Friday, the closest workday to the new holiday.

Many states like Maryland, Nebraska, Missouri, West Virginia and Alabama will give most public employees the day off, but government workers in other states, like California, will have to wait to feel the effect of the new law.

Now that Juneteenth is officially a federal holiday — and many U.S. government employees have Friday off — companies and state and local governments are under increasing pressure to craft policies and plans to commemorate the day not just this year, on hasty notice, but beyond.

Dozens of companies such as TikTok, Uber Technologies Inc. and Mastercard Inc. gave employees paid time off for Juneteenth for the first time last year, amid nationwide racial justice protests. This year, once again, many of the workplaces offering a day off appear to be white collar offices, tech, and media companies.

States across the country have scrambled to close their government offices Friday after President Biden signed legislation establishing Juneteenth as a US federal holiday https://t.co/LmSQTH8qPk