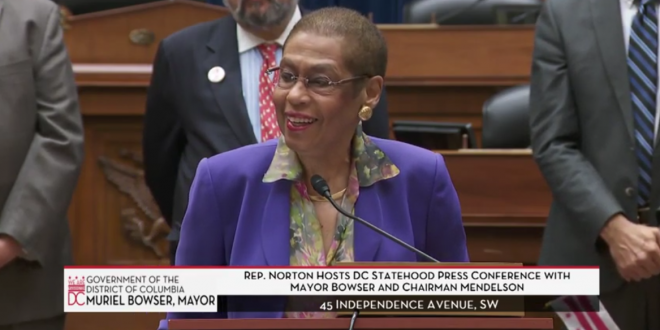 A Senate committee next week will hold a hearing for legislation to make Washington, D.C., the country’s 51st state, the District’s House Delegate Eleanor Holmes Norton (D) announced on Tuesday.

“The Senate hearing shows that momentum continues to build for our D.C. statehood bill,” the longtime D.C. House delegate said in a statement, noting that this is only the second time the upper chamber has held a hearing on the issue.

“D.C. statehood now has 54 percent support nationwide, according to the most recent detailed poll, and I expect that support to grow even more after the Senate hearing, as it has after the House hearings.”

Read the full article. The House passed the bill in April.

Previous A QAnon Nutbag, An Insurrectionist, An Anti-Vaxxer, And A White Supremacist Introduce The “Fire Fauci Act”
Next Red-Caped Catholic Loons: Defend Yourself Against Woke Feminist Witches With The BVM’s Holy Rosary