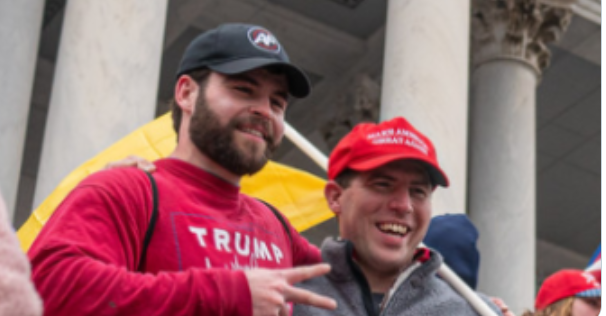 Matthew Baggott was arrested Sunday in Murfreesboro while Stewart Parks was arrested Thursday on charges of entering or remaining in restricted building or grounds without lawful authority, disorderly or disruptive conduct in restricted building or grounds/impeding official business, violent entry or disorderly conduct on Capitol grounds and theft of government property, according to court documents.

According to court documents, several witnesses reported they had observed posts on an Instagram account belonging to Parks which indicated he had entered the U.S. Capitol building on Jan. 6. A witness who knew Parks confirmed to investigators that Parks and Baggott were in a picture from the Capitol and they had gone to Washington to attend the “Stop the Steal” rally. Video footage from inside the Capitol building show Parks and Baggott entering the building around 2:13 p.m.

HAHAHAHA i went to high school with 2 dudes who got arrested for storming the capitol. Of course i did. Life is a video game. Hahahaha. Dorks.https://t.co/2adUb1CVWD

Feds say Parks took police equipment, posted on IG days after riot: “We ain’t giving up, No way in hell is Biden getting the Presidency” pic.twitter.com/7kKGdZ6Xn0

“PARTY WAS FUN TIL THE SWAT SHOWED UP.”

Previous US Added 559K Jobs In May, Unemployment At 5.8%
Next Feds Can’t Confirm Or Deny UFOs Are Alien Spacecraft