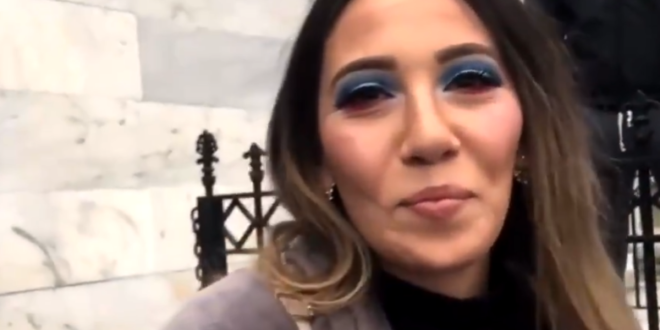 A 27-year-old California woman was arrested in Alabama on Friday in connection with siege of the U.S. Capitol, the Department of Justice said.

The suspect was identified as Stephanie Baez in no small part because she was recorded on Jan. 6 providing her Instagram handle while declaring that she loves the Proud Boys and was hoping to “find a Proud Boy” that day.

According to the FBI, the Baez is the individual seen inside the Capitol Crypt on Jan. 6 wearing a T-shirt with 1984 author George Orwell’s face on it and the words “Boy, did I call it or what?”

“Woman Who Said She Was Looking to ‘Find a Proud Boy’ on Jan. 6 Is Now Looking at Federal Charges”@Matt_Naham reports. https://t.co/4C7qxJQKfo via @lawcrimenews

Stephanie Baez, who was recorded saying she was “looking for a Proud Boy,” was arrested today in Alabama in connection with the Jan. 6 Capitol attack. pic.twitter.com/PzirBKHRT7

“Nah. I’ll be fine. I’m not on Twitter and I doubt anyone would recognize me. I mean, they can do ahead and do whatever, I practice my 2nd amendment.” pic.twitter.com/si6vyiHG9x

“It’s my proudest moment. Just sucks they used such a horrible pic, I want to send them the one of me in my USA bikini and be like ‘here, please use this at least lol.’”

The feds may have missed it, but Stephanie Baez was apparently also photographed by the AP ahead of Jan. 6. https://t.co/UwnWJnivfC pic.twitter.com/h7mYJXNXiK

Previous Christian Show: Satan Gave All Of Our Crew COVID Because His “Favorite Sodomite” Milo Is Now Ex-Gay
Next US-Mexico Soccer Match Halted For Anti-Gay Chants