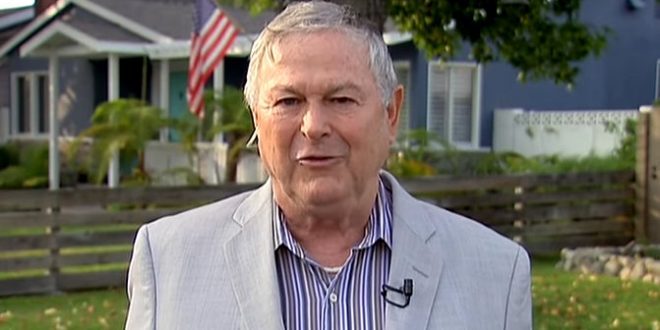 Former congressman Dana Rohrabacher (R-Calif.) said Monday that he was among the crowds outside the U.S. Capitol on Jan. 6, but claimed that he was there to protest the election and did not join others in storming the building.

Rohrabacher acknowledged his presence outside the Capitol in an interview with a Maine newspaper. Over the weekend, social media users began circulating photos that appeared to show the former congressman and an associate standing among the pro-Trump crowd.

Read the full article. Rohrabacher, you may recall, was widely known as “Putin’s favorite congressman.” He last appeared on JMG when he declared that people should be able to refuse to sell their homes to “immoral gays.”

Former congressman Dana Rohrabacher says he protested outside the Capitol on Jan. 6 https://t.co/k9fDvfmh27

#SeditionHunters – Thursday’s arrest of Alan Hostetter highlighted extremism in Orange County, CA, but even he is junior-league. We knew OC would send their finest, and here he is, the highest-profile #SeditionVIP yet: former U.S. Congressman Dana Rohrabacher (R-CA 42). 1/ pic.twitter.com/yJDdR5aR4T

In 2016, House majority leader Kevin McCarthy (R-CA 23) famously said “There’s two people I think Putin pays: Rohrabacher and Trump.” On Jan 6, Rohrabacher roamed the Capitol all day with a guy in a giant ushanka hat. Is this epic trolling by Russia? 2/https://t.co/2zRLmLk40P pic.twitter.com/n4fl9f8HKi

Rohrabacher’s been a fervent defender of Putin and Russia, lost his seat in the 2018 election. On Jan 6 he joined the attack on his former colleagues with his pal #RohraBoris, arriving early at the E. Plaza, then moving West by 2:50 PM, in time for the fighting at the tunnel 3/ pic.twitter.com/zRdfp3QFJC