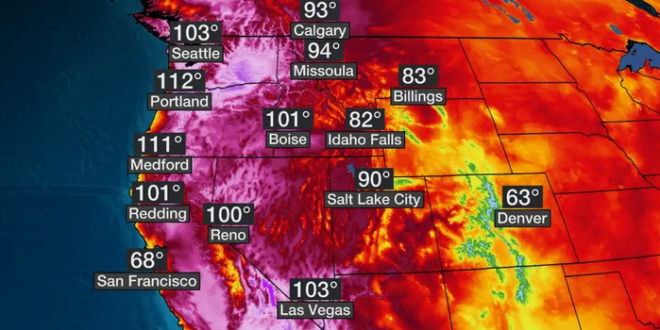 The most severe heat wave in the history of the Pacific Northwest is near its climax. The National Weather Service had predicted it would be “historic, dangerous, prolonged and unprecedented,” and it is living up to its billing as it rewrites the record books.

On Monday, Portland, Ore., soared to at least 113 degrees, the highest temperature in more than 80 years of record-keeping. It marked the third straight day the city had climbed to an all-time high. On Sunday, it hit 112 Sunday after reaching 108 Saturday, both of which broke the previous all-time record of 107.

Seattle was up to at least 106 degrees Monday afternoon, surpassing the all-time record of 104 degrees set Sunday (which topped the previous mark of 103).

Canada broke a national heat record on Sunday when the temperature in a small town in British Columbia reached almost 116 degrees Fahrenheit, breaking an 84-year-old record by nearly 3 degrees, with dangerously hot weather expected to continue for several more days.

“This is a complete shock to a Canadian — this feels like Las Vegas or India — not Vancouver,” said Chris Johnson, a criminal lawyer who on Monday was heading to an air-conditioned hotel room as temperatures inside his home reached 90 degrees Fahrenheit.

Amazon is turning part of its Seattle headquarters into a public cooling center as the Pacific Northwest grapples with a record-breaking heat wave.

The air-conditioned cooling center is set up at the Amazon Meeting Center, which is part of the company’s South Lake Union campus in downtown Seattle.

The site has room for up to 1,000 individuals, according to the city of Seattle’s website. Many homes in the area lack air conditioning, as Seattle’s climate is usually temperate.

Nationwide, about 91% of U.S. homes have primary air conditioning installed, according to data from the American Housing Survey. By comparison, that figure is 78% for Portland and just 44% for Seattle.

“The Pacific Northwest, west of the Cascade mountains, has a history of very mild summers, so the need for cooling has not been a strong driving force,” Wes Davis, the director of technical services for the Air Conditioning Contractors of America, wrote in an email to NPR.

Meanwhile, for the service technicians who are being called on to repair existing air conditioning units during the current heatwave, “everyone is just swamped,” says Dan Pfau, executive director of the Oregon Air Conditioning Contractors Association.