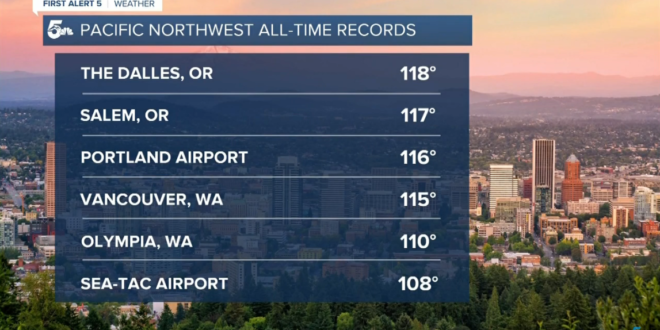 Dozens of people have died in Canada amid an unprecedented heatwave that has smashed temperature records. Police in the Vancouver area have responded to more than 130 sudden deaths since Friday. Most were elderly or had underlying health conditions, with heat often a contributing factor.

Canada broke its temperature record for a third straight day on Tuesday – 49.6C (121.3F) in Lytton, British Columbia. Before Sunday, temperatures in Canada had never passed 45C. In Vancouver alone, heat is believed to have been a contributing factor in the unexpected deaths of 65 people since Friday.

British Columbia Premier John Horgan said the hottest week the province had ever experienced had led to “disastrous consequences for families and for communities”.

Hundreds of people have visited emergency departments or urgent-care clinics in the Pacific Northwest since Friday — and as many as 60 deaths have been reported — as an excruciating heat wave smashed all-time temperature records in Oregon, Washington and Canada.

Portland set record-high temperatures three days in a row, topping out at 116 degrees. Seattle hit 108 degrees, a new record. At least two locations in Washington reached 118 degrees, which, if confirmed, would tie the state temperature record that dates back to 1928.

A town in southwest Canada registered a temperature of 117.5 degrees — the highest ever recorded in the country, and around 48 degrees above what’s normal for this time of year.

With global warming making heat waves and other extreme weather events both more likely and more severe, this week’s sizzling temperatures may herald a climate reality that scientists thought was still decades in the future.

The effects of extreme heat are similarly being felt around the world. Parts of eastern Europe and Russia are currently baking under record highs, with some Bulgarian cities predicted to reach 104 degrees and temperatures in Siberia soaring to nearly 90 degrees.

Though attributing any specific event to climate change is tricky, scientists say the overall effect of global warming is undeniable, creating conditions that are ripe for heat waves and other extreme weather events.