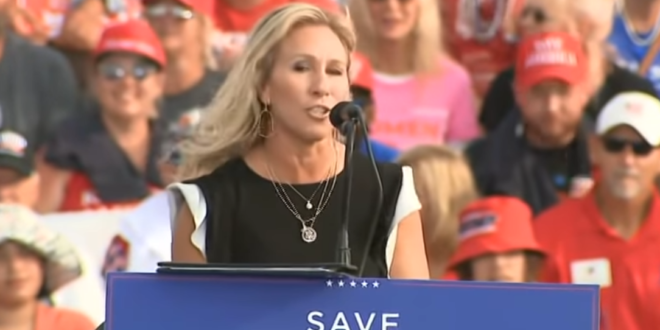 Rep. Marjorie Taylor Greene (R-GA) spoke at former President Donald Trump’s rally in Wellington, Oh. on Saturday, and used her time on stage to attack Rep. Alexandria Ocasio-Cortez (D-NY) as a “little communist” and “not an American.”

After polling the crowd to make sure they agreed that Trump was “still their president” and falsely claiming that “Democrats stole the election,” she called Ocasio-Cortez “the little communist from New York City.”

As the crowd booed in response, Greene nodded and said, “Yeah, lock her up too. That’s a good idea. She’s not an American. She really doesn’t embrace our American ways.”

Marjorie Taylor Greene calls AOC a little communist and says locking her up is a good idea. She also says AOC isn’t an American pic.twitter.com/aCT1JTtC69

She also said she wants to impeach President Biden, expel Maxine Waters, and fire Dr. Fauci. The crowd chanted lock him up while she pumped her fist in the air. pic.twitter.com/s381rtVtF2

First of all, I’m taller than her https://t.co/H6rXG66GJk