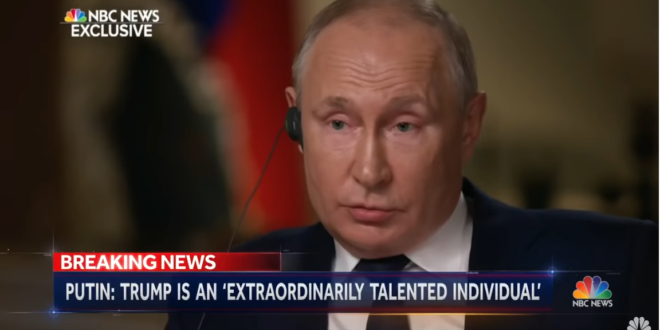 “Well even now, I believe that former U.S. president Mr. Trump is an extraordinary individual, talented individual, otherwise he would not have become U.S. president,” Putin told NBC’s Keir Simmons during a wide-ranging and, at times, contentious interview. “He is a colorful individual. You may like him or not. And, but he didn’t come from the U.S. establishment. He had not been part of big-time politics before, and some like it, some don’t like it but that is a fact.”

As for Biden, Putin said the current White House occupant “is radically different from Trump because President Biden is a career man. He has spent virtually his entire adulthood in politics. That’s a different kind of person, and it is my great hope that, yes, there are some advantages, some disadvantages, but there will not be any impulse-based movements on behalf of the sitting U.S. president,” he said.

In NBC interview, Putin calls Trump ‘colorful’ but says he can work with Biden https://t.co/Rdu43tpSpP pic.twitter.com/egU0NtZlo6

Previous Newsmax Calls For State To Investigate After Student “Illegally” Says “Under Allah” In Pledge Of Allegiance
Next John Dean: Trump’s DOJ Was “Nixon On Steroids”