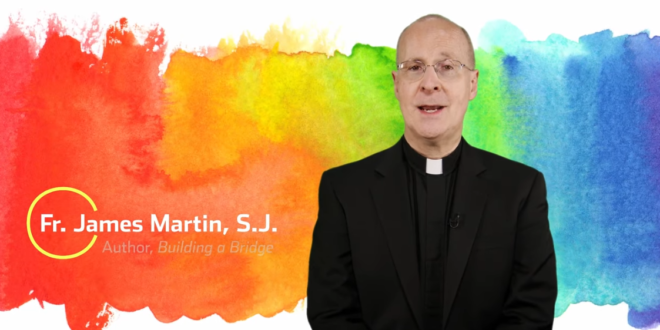 Pope Francis sent a letter praising the work of a Jesuit priest who has been an outspoken advocate for more respectful treatment of LGBTQ people within the Catholic Church, in which the pontiff described Father James Martin’s work as imitating the “style of God.”

The letter, written in Spanish and dated June 21, was in response to a communique sent to Francis by Martin that referenced the Outreach LGBTQ Ministry Conference, a gathering focused on Catholic LGBTQ issues hosted virtually by Fordham University this weekend.

Read the full article. As you may know, Martin has long been a target of anti-LGBT activists and hate groups. His speeches are often protested in person by groups such as the red-caped Catholic loons.

Pope Francis @Pontifex has sent a beautiful letter on the occasion of the Outreach LGBTQ Catholic Ministry Webinar, which happened yesterday, expressing his support for this ministry and encouraging us to imitate God’s “style” of “closeness, compassion and tenderness”… pic.twitter.com/O9nTftoLDi

Initially I thought to share only the sections of the letter intended for yesterday’s conference, but I thought people might wonder what was in the rest of the letter, so I am sharing the entire message, including the personal greetings at the beginning…

The “PS” (PD in Spanish) that the Pope refers to was a reminder about the LGBTQ Catholic Ministry conference, which would take place in a week’s time…

I’m sharing the Holy Father’s original handwritten letter, the Spanish transcription that was sent along with his letter, and an English translation prepared by several people, including an Argentine friend…