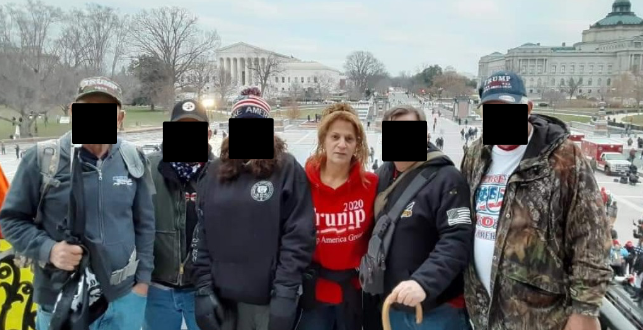 On January 7, 2021, the FBI received a tip through the FBI Office of Public Affairs Digital Media Tips website. The tipster provided a screen capture of a photograph posted on Facebook that appears to have been taken outside the U.S. Capitol on what is believed to be January 6.

Along with the picture, the tipster included this statement: “Sandy Weyer entered in the Capitol on Jan. 6th with….I have screenshots of Sandy stating she stormed the Capitol. She also had a live however Facebook took it down. Sandy also stated she has no fear when asked if gets in trouble with the police.”

“FUCKING TRAITOR, GET THE FUCK OUT!”

Sandy Pomeroy Weyer was arrested in Pennsylvania today in connection with an assault on a New York Times photographer during the U.S. Capitol attack. pic.twitter.com/y1BU9QkgeP

“Weyer can be heard yelling: ‘GET HER OUT, MACE HER’ as the [member of the news media] victim is again pushed back by her assailants as they flee.” https://t.co/DxtwOCIXjA pic.twitter.com/Dl7qncRPpf

Weaver rode on a bus paid for by Trump associate and Pa. state Sen: Doug Mastriano, who was repeatedly photographed with another violent insurrectionist on the FBI wanted list: https://t.co/TW6T8rXLmR https://t.co/EyyDCO9o8Y

Mastriano ties are going to continue to pop up in a lot of Capitol attack cases out of PA.https://t.co/lQ4wUHnFxn