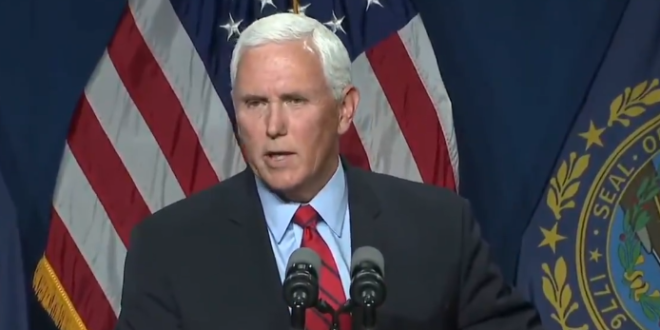 Pence: I May Never See Eye-To-Eye With Trump On Riot

Former Vice President Mike Pence delivered his strongest comments yet about the Jan. 6 pro-Trump riot attack on the U.S. Capitol on Thursday, saying he and former President Donald Trump may never see “eye to eye” on the event.

“January 6 was a dark day in the history of the United States Capitol,” Pence said at the Hillsborough County, New Hampshire, Republican Committee’s Lincoln-Reagan Dinner.

He added: “You know, President Trump and I have spoken many times since we left office. And I don’t know if we’ll ever see eye to eye on that day.” Pence still praised the accomplishments of the Trump administration.

The two men did not speak for several days after the attack and have since gone their separate ways — including on Inauguration Day for President Joe Biden, when Pence remained in Washington to attend Biden’s swearing-in ceremony and Trump left for Florida before it began.

Despite their occasional phone conversations, Trump has continued to criticize Pence and then-Senate Majority Leader Mitch McConnell in his post-presidential statements for allowing Congress to certify the 2020 election outcome.

As recently as May 15, Trump accused Pence in a statement circulated by his Save America PAC of lacking the “courage” to help overturn the election results.

Former Vice President Mike Pence is making headlines for comments he made about the Jan. 6 Capitol Hill riots, calling it a “dark day” and saying that he and former President Trump don’t agree on what happened that day. pic.twitter.com/sTLI7nV1on

Previous Giuliani Now Doing Ads For MyPillow Slippers [VIDEO]
Next Fox Host: “We All Have Healthcare In This Country”