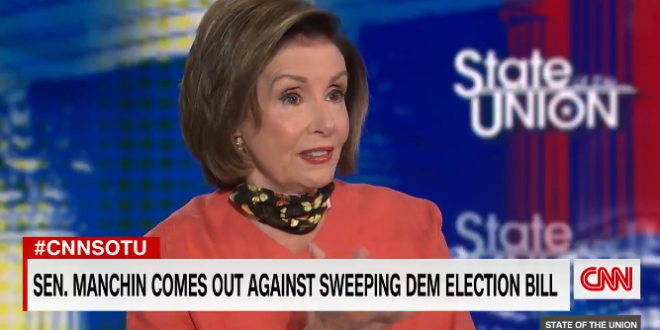 Pelosi: I Haven’t Given Up On Joe Manchin [VIDEO]

“I don’t give up on Joe Manchin. When he was governor and Secretary of State in West Virginia he initiated many of the initial ideas that are in the HR 1, S.1, the For the People Act. I read his op-ed and you read a part of it, I think he left the door open. I think it’s ajar. I’m not giving up. I do know that he has certain concerns about the legislation that we may be able to come to terms on.” – House Speaker Nancy Pelosi, this morning on CNN.

Nancy Pelosi says she’s been in touch with Joe Manchin about HR1 and believes there’s still a possibility he’ll support it pic.twitter.com/Kv5H2i7oQ7

House Speaker Nancy Pelosi says she hasn’t given up on Sen. Joe Manchin when it comes to passing a voting rights bill: “We have to make this fight for our democracy. It isn’t about Democrats or Republicans. It’s not about partisanship. Forget that. It’s about patriotism” #CNNSOTU pic.twitter.com/0QFmWrhPjv