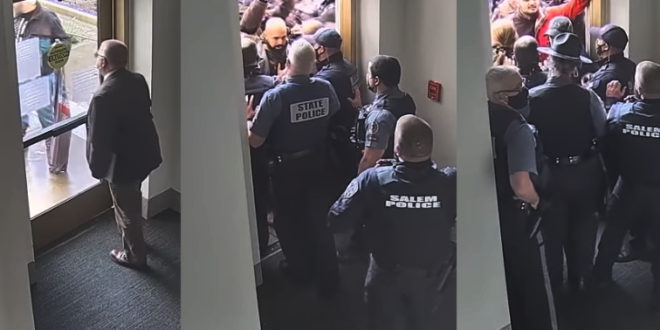 The Oregon Capitol is closed amid the coronavirus pandemic, “so you can’t come in,” the Republican legislator from rural Polk County acknowledges in a newly publicized video of a meeting that apparently took place mid-December. But then he drops hints about something called “Operation Hall Pass.”

“Which I don’t know anything about, and if you accuse me of knowing something about it, I’ll deny it,” he says in the video.

He gives a phone number — “just random numbers that I spewed out” — and says that if people were to text it with their location, somebody might exit through the right door at the right moment. On Dec. 21, according to previously released surveillance video, Rep. Mike Nearman did just that.

Read the full article. As I reported last month, Nearman has now been criminally charged for letting the armed mob into the state Capitol.