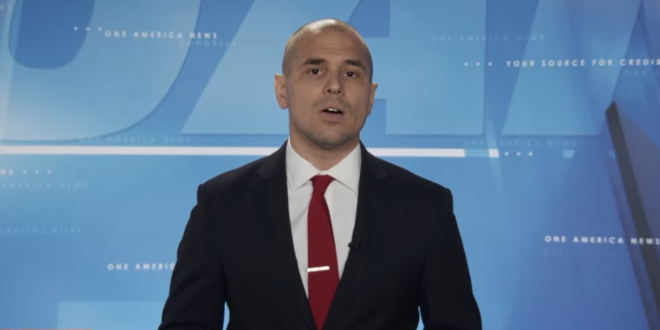 “The simple facts point to massive and widespread problems with voting integrity. What happens to all these people who responsible for overthrowing the election?

“What are the consequences for traitors who meddled with our sacred democratic process and try to steal power by taking away the voices of the American people.?

“What happens to them? Treason is considered the highest of all crimes and is the only crime defined in the U.S. Constitution which states that anyone is guilty of treason if they support America’s enemies.

“So far, there have been numerous indications that foreign governments including China and Pakistan, meddled in our election to install Joe Biden as president.

“Any Americans involved in these efforts from those who ran the voting machines to the very highest government officials — is guilty of treason under US code 2381, which carries with the penalty of death.” – OAN host Pearson Sharp.

Before you discount this insane rant, remember that recent polls show that a third of Americans believe what he is saying and that millions of them are heavily armed. Not incidentally, other Sharp videos have been posted to Trump’s official YouTube channel.

There’s a real fascist vibe to this One America News personality calming calling for the execution of potentially tens of thousands of Americans over fake voter fraud claims. pic.twitter.com/wm4E0qVJaf