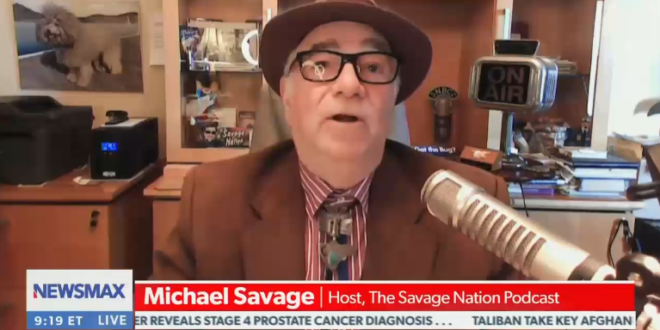 Newsmax Guest Michael Savage Compares Race Theory To Holocaust: “This Is The Road To The Death Camps”

These children are being humiliated and hurt and damaged for life by a psychotic woman who came up with this lie called critical race theory, which is nothing but racism towards white people.

The next thing you know they were being excluded from swimming pools. They didn’t put them in concentration camps overnight. I studied this intimately. I am Jewish. I know how this starts.

Attacks on white people is exactly what was done to the Jews in Germany in the thirties. Don’t fall for this garbage. This is the road to the death camps. Stand up to these bastards and sue them.

RELATED: Last year Trump put Savage in charge of San Francisco’s Presidio Trust, which is the federal commission that runs a 1200-acre park at the Golden Gate Bridge. As Mother Jones reported earlier this year, chaos and racism ensued due to Savage’s moves against an on-site gallery exhibit about the Japanese internment. Read their deep dive. The SPLC has noted that Savage subscribes to the racist “white genocide conspiracy theory.”