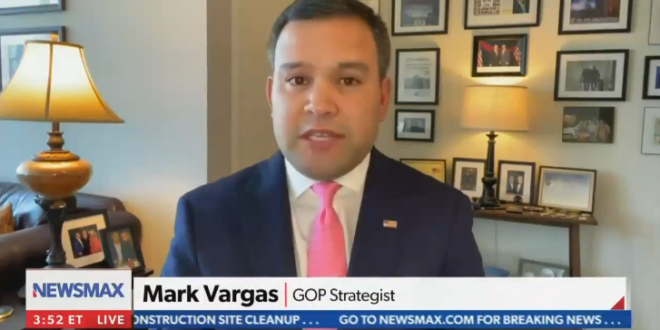 Earlier this week, Newsmax held a panel discussion about a Virginia high school student who said “Allah” instead of “God” while reciting the Pledge of Allegiance in front of her class graduation ceremony.

During the discussion in which five indignant people took umbrage at this development, conservative radio talkshow host Mark Vargas called the act “unpatriotic,” and said, “There needs to be consequences for this” because act was “not tolerable.”

After the segment was roundly mocked on social media, Vargas returned to the network on Friday to defend himself by incorrectly claiming that what the student did was “illegal and in violation of state and federal laws.”

MARK VARGAS (GUEST): Well you know, this is what the left does. They want to belittle and degrade and mock your service to our country all because you’re trying to defend our Pledge of Allegiance. But yesterday, I said it was un-American and unpatriotic.

It’s also illegal and in violation of federal and state laws. And I’m calling on the state attorney general to look into this. You know, the laws are very clear.

You can respectfully decline to recite the Pledge of Allegiance, but you cannot recite it and alter the words and use — pull out God and say whatever you’d like. And so, again, I think it’s important. It’s unpatriotic, it’s un-American, and it’s also illegal. And I think the state attorney general ought to look into this.

Rather obviously, it’s not illegal to alter the Pledge in any way. And of course, Allah is merely the Arabic word for God.