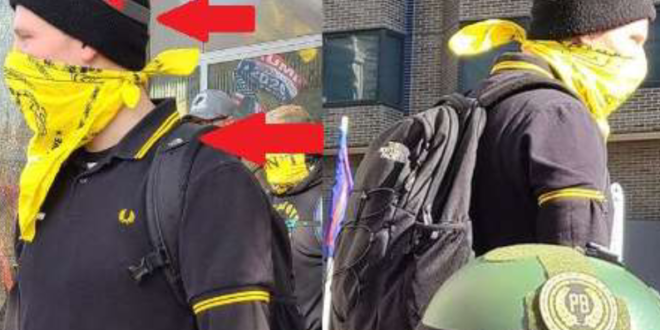 Today, agents with the FBI’s Newark Field Office arrested a New Jersey man and self-identified Proud Boy for crimes related to the breach of the U.S. Capitol on Jan. 6, which disrupted a joint session of the U.S. Congress in the process of ascertaining and counting the electoral votes related to the presidential election.

Shawn Price, 26, of Rockaway, New Jersey, is charged with federal offenses that include violent entry and disorderly conduct on Capitol grounds; obstruction of law enforcement during a civil disorder; and obstruction of justice. Price made his initial court appearance this afternoon in the District of New Jersey.

As alleged, Price held a leadership position in the northern New Jersey chapter and attended multiple events and rallies from November 2020 to January 2021.

As depicted in photographs taken at the Capitol on Jan. 6, Price was on the lower west terrace helping to push other individuals forward into a line of law enforcement officers while the officers resisted and deployed a chemical irritant in an apparent attempt to disperse the crowd.

In addition, on Jan. 6, Price sent Facebook messages to other users stating, “I led the storm!”, “[I] got really f***** up but me and 4 of my chapter brothers pushed that line and started it ourselves had to be done.”

Feds arrest and charge a self-identified Proud Boy who allegedly boasted in a Facebook message to his mother that he “led the storm” of the U.S. Capitol on Jan. 6th.

Feds allege text messages between Price & his mom on Jan 6

Price: “I led the storm”
Mom: “Get out of there”
Price: “I need.. remedy for pepper spray”
Mom: “Try.. baby shampoo” pic.twitter.com/Xcy3ZTPM8l

NEW: Another Proud Boy charged in connection with the Capitol attack.

Shawn Price, a 26-year-old from New Jersey, was arrested today.

“I led the storm!” pic.twitter.com/NnIzPuaKUB

NEW U.S. arrests self-described N.J. Proud Boys member Shawn Price in Jan. 6 Capitol riot, alleging he posted on Facebook “. . .me and 4 of my chapter brothers pushed that line and started it ourselves had to be done,” re: attack on police line @ W Terrace https://t.co/RpgTLbeqaZ pic.twitter.com/Ef4PhcURZb