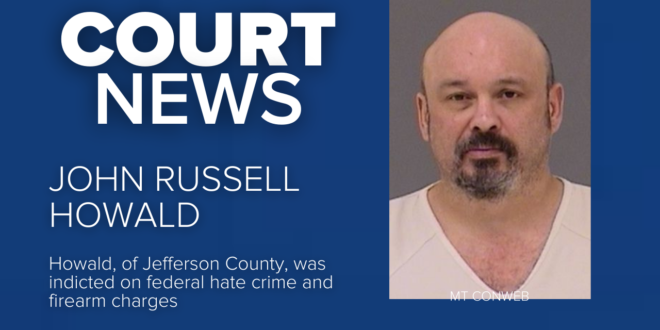 A federal grand jury in Billings, Montana, returned an indictment on May 20 charging a Montana man with hate crime and firearm violations for allegedly firing a gun into an individual’s house and threatening the individual with violent, homophobic slurs.

According to court documents, John Russell Howald, 44, of Basin, is charged with violating the Matthew Shepard and James Byrd Jr. Hate Crimes Prevention Act, and with the use of a firearm during and in relation to a crime of violence.

The indictment alleges that on March 22, 2020, in Basin, Howald attempted to injure an individual because of their actual and perceived sexual orientation by discharging a firearm into the individual’s house, stating that he wanted to “get rid of the lesbians [and] gays.” The offense included an attempt to kill the individual.

Howald is scheduled for an arraignment on June 29 before a U.S. Magistrate Judge in Great Falls. If convicted, Howald faces up to life in prison on the hate crime charge and a mandatory minimum of 10 years in prison, consecutive to any other sentence, on the firearm charge.

According to the Montana Department of Corrections, Howald has state felony convictions in Jefferson County for criminal endangerment (February 2021) and cruelty to animals (July 2006).

The Helena Independent reported in 2005:

Howald and three other men were at a campsite near Bernice when two dogs showed up, according to one of Howald’s companions quoted in court documents. When the dogs would not leave the site, Howald allegedly shot at them, wounding a chocolate Lab.

He allegedly pursued the wounded Lab around the side of a trailer and then into the trees and shot at it a number of times, then came back to the campsite and got a chainsaw and severed the dog’s head.

Howald then allegedly drove to a campsite occupied by Mike and Brenda Sullivan of Butte and threw the severed head of their dog at them, saying “Here is your f—— dog back,” according to the documents.