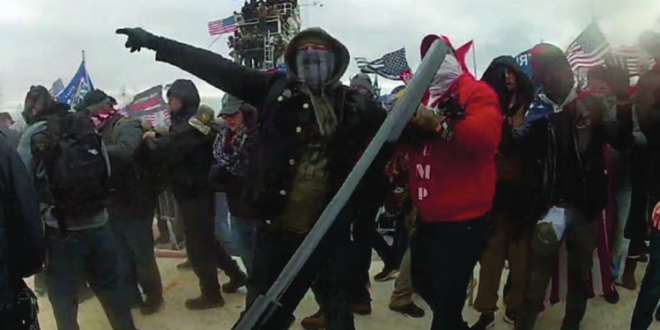 A 42-year-old Minneapolis man has been taken into custody and charged with allegedly assaulting a federal officer during the Jan. 6 breach of the U.S. Capitol.

Mock is seen in body camera footage amongst the crowd of violent rioters who were advancing on officers defending the Capitol, the complaint said. At one point, he is seen shoving a U.S. Capitol officer to the ground. He then allegedly picked up multiple riot shields that officers were using and passed them back to members of the rioting crowd.

Mock’s girlfriend allegedly posted on Facebook, tagging Mock, and said that they were teargassed, pepper sprayed and mustard gassed at the Capitol, but “stayed true to being Patriots” and “stormed the Frontline.”

A 42-year-old Minneapolis man has been taken into custody and charged with allegedly assaulting a federal officer during the Jan. 6 breach of the U.S. Capitol. Another Minnesotan and his father also face charges in the Capitol attack. https://t.co/D7Iili37zo

*Brian Mock of Minneapolis was arrested Friday on serious charges in Capitol riot.
*Clashed with cops on front lines.
*Took riot shields from officers; passed them to rioters.
*Bragged he “beat the sh*t” out of officer.
*Charges: Assault, obstruction, etc.https://t.co/tsXLgmxzh8 pic.twitter.com/v2zs8ySF42

Powerful pair of images of January 6th in the latest set of charging documents!

I mean… these pictures side-by-side pic.twitter.com/ZDsObqtbBg

“I said goodbye to my 4 children, not sure if I was going to come home. I was at peace with that knowledge.”

IOW, Brian Mock had no consideration whatsoever for his 4 children. His ego trip was more important.

Not only a traitor, but also an irresponsible parent. pic.twitter.com/eziBC0xWfk

The FBI says that Brian Mock went to the U.S. Capitol on Jan. 6 unsure of what he would face, but as he shared on social media just days later, he was prepared to fully commit to whatever came his way — even death. https://t.co/lvZRDDUovG