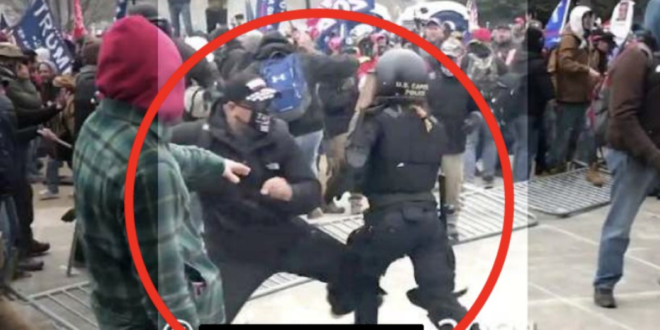 Shane Jason Woods, 43, of Auburn, is charged with federal offenses that include assault on a law enforcement officer; assault in special maritime and territorial jurisdiction; and engaging in physical violence in a restricted building or grounds, among other charges. Woods will make his initial court appearance in the Central District of Illinois on June 24 at 4:30 p.m. EST.

According to court documents, Woods was at the U.S. Capitol on Jan. 6 in a large crowd of protesters who were congregated on the lower west terrace in the northwest corner of the building. Around 2:10 p.m., a U.S. Capitol Police (USCP) officer was one among several sprayed with bear mace, which obstructed her vision.

As the officer tried to pursue the individual who sprayed the bear mace, Woods can be seen in publicly available video running toward her. He then tripped the officer and pushed her to the ground.

At approximately 4:50 p.m., a large crowd made its way to a media staging area that was set up outside the northeast corner of the U.S. Capitol grounds. As individuals stormed past metal barricades, media members were forced to flee the area before recovering all of their cameras and equipment.

As depicted in several publicly posted videos and images, Woods gathered in the vicinity of the media staging area around 5 p.m. where several protestors were yelling and spitting at members of the news media near a pushed-over fence next to the staging area.

Moments later, Woods climbed over the toppled fence and participated in the assault on the media equipment. Woods can be seen walking around the piled media equipment, as well as picking up and tossing some of it.

He was also observed walking closely around a cameraman. As depicted in publicly available video, Woods then ran into and tackled the cameraman, causing him to fall and drop his camera.

Shane Jason Woods arrested in Jan. 6 attack today. Assaulted both cops and media. Tripped an officer after she was running away after she was bear sprayed. Was FBI 238-AFO (aka #AllBlackTrumpHat). pic.twitter.com/gXE4EaSchB