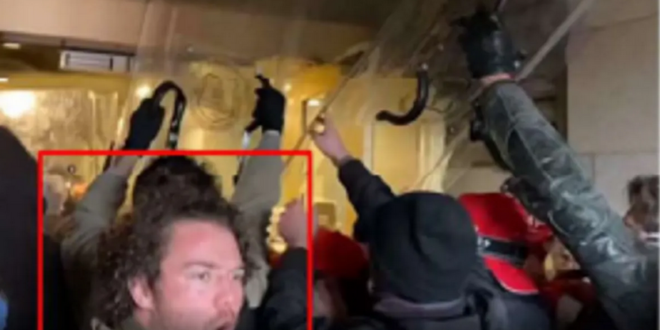 Geoffrey Sills, 30, of Mechanicsville, is charged with federal offenses that include assaulting, resisting or impeding officers using a dangerous weapon; obstruction of an official proceeding; and civil disorder, among other charges. Sills made his initial court appearance in the Eastern District of Virginia on June 21.

According to court documents, Sills was on the lower west terrace of the Capitol on Jan. 6 where he was seen on U.S. Capitol Police (USCP) surveillance, videos posted online, and body-worn camera (BWC) footage repeatedly assaulting multiple law enforcement officers.

As depicted in the footage, Sills threw multiple objects, including pole-like objects, at law enforcement officers around 2:30 p.m., as the officers retreated and the crowd advanced forward. USCP surveillance footage then captured Sills in one of the first groups of rioters entering the tunnel around 2:41 p.m, while holding his phone up as if it were recording.

The same activity is captured in video footage posted to the defendant’s Instagram account. As alleged, Sills continued to record while the crowd moved forward in the tunnel. While inside, he repeatedly struck multiple police officers with an extended baton while using a strobe light, apparently to try to disorient the officers.

At various times, Sills was pushed toward the back of the crowd and repeatedly made his way forward toward the front of the police line. At approximately 3 p.m., Sills turned around and left the tunnel, walked into the crowd and lifted the baton over his head.

[BREAKING] Geoffrey Sills (aka #EmoNazi) has been indicted by a federal grand jury on *TEN COUNTS* https://t.co/MIWK9YALAd

While inside the Capitol, Geoffrey Sills, 30, of Mechanicsville, repeatedly struck multiple police officers with an extended baton while using a strobe light, apparently to try to disorient the officers. https://t.co/0ylEYjGsGS

#CapitolRiot: Geoffrey Sills, of Mechanicsville, Virginia – FBI BOLO #153 aka #emonazi – has been arrested and charged w/ 10 counts for allegedly joining in the assault on police inside the Capitol tunnels on January 6. @wusa9 @EricFlackTV https://t.co/ygZ1pdrHBm