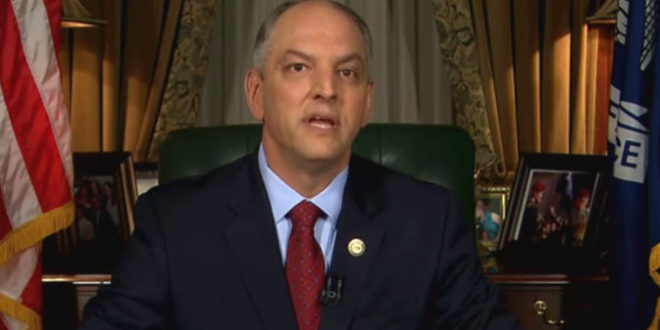 A furious press release from the NRA’s lobbying arm:

In the waning hours of last night, the final day to sign Louisiana’s Constitutional Carry Legislation into law, John Bel Edwards decided to listen to the anti-gun minority in the Sportsman’s Paradise, and veto Senate Bill 118.

Despite the thousands of emails, calls, and texts coming from NRA Members and Second Amendment supporters, Governor Edwards sided with gun control groups in vetoing his constituents’ right to effectively defend themselves and their loved ones.

It is more important than ever that you now call and email your State Lawmakers and ask them to SUPPORT a veto session and vote to override Governor Edwards’ veto of Senate Bill 118.

Senate Bill 118 removes the requirement for law-abiding individuals to obtain a concealed handgun permit before being allowed to carry concealed, a handgun for self-defense.

This important legislation ensures that citizens are able to exercise their right to self-defense without government red tape or delays.