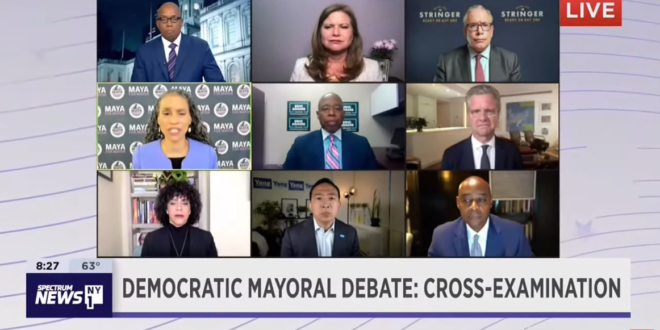 Eight Democratic candidates vying to become the next mayor of New York City will face off live and in person on Wednesday night for the second of three official primary debates.

The first much anticipated in-person debate comes with roughly three weeks to go until the June 22nd primary, in an election that will determine the city’s path to recovery as well as how it tackles other profound issues such as public safety, police reform, and racial and economic justice.

With sparse and questionable polling and a large portion of voters saying they are still undecided, experts say that the race is still fluid.

Read the full article. New York City’s ABC News affiliate will be live-streaming the debate here. Start time is 7PM Eastern and I’ll bump up this post shortly before then. If YouTube streams are available, I’ll add them to this post at that time. As you can see by this post’s photo, the first debate was held virtually. This one will be in-person.