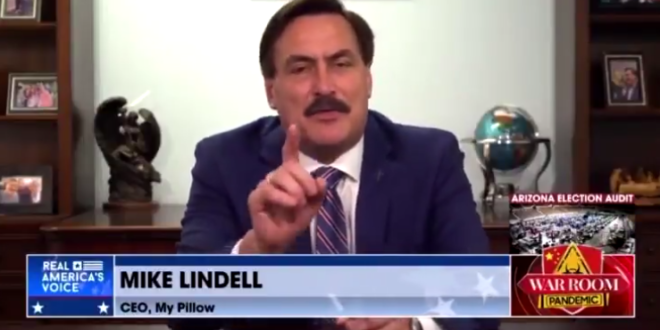 Lindell: I’m Spending “A Lot Of Money” To Track Down The “Bots And Trolls” That Got My Lawyer Fired [VIDEO]

“I want everyone to know about cancel culture. The law firm that we hired here in Minneapolis. They were hired — you have to get a local firm — that was hired, so we hired them. Well they were attacked by bots and trolls and emails and everything, after this was filed last Thursday.

“On Friday morning they fired the attorney that had signed it. They fired him and said ‘We didn’t know anything about it.’ Well, what’d I give you the check for? You know, I mean, this is crazy. They were so fearful of attacks by these bots and trolls.

“So you know what I’m doing? I just spent another — it’s a lot of money, I’m not going to say how much — on a whole ‘nother team of investigators to find out who hired those bots and trolls. I’m going to get to the bottom of all this.

“These people that hire these attack groups — I mean, they went right after the law firm. These guys didn’t do nothin’! We were using ’em just to sign the thing. I mean, the other attorneys, we’ve had for three months.” – Mike Lindell, screaming to Steve Bannon.

MyPillow Guy Blames ‘Bots And Trolls’ After Biglaw Partner Was Fired For Signing On To His RICO Suit https://t.co/eDRJhbUaPh

Mike Lindell yesterday complained that the attorney he hired to fire the counter-suit against Dominion was fired by his firm because “bots and trolls” attacked the firm. He then says he has hired a team of people to track down the “bots and trolls” and go after them. pic.twitter.com/7vGqLukNtI