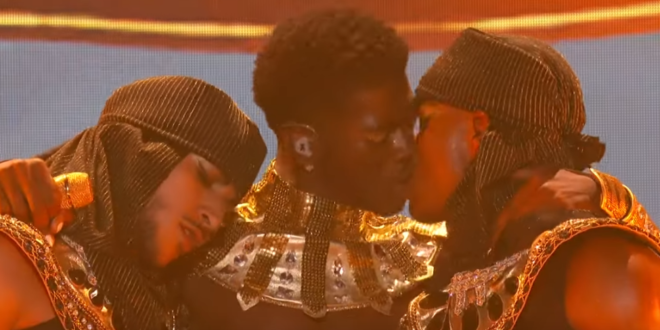 When Madonna shared a same-sex smooch with Britney Spears and Christina Aguilera at the 2003 MTV Video Music Awards, it was a sensation, but when openly gay pop singer Adam Lambert enjoyed a similar moment with a male band member at the 2009 American Music Awards, it caused a backlash that nearly derailed his career.

Societal progress was evident Sunday — during the final weekend of Pride Month — at the BET Awards, when Lil Nas X ended his fiery performance of the homoerotic hit “Montero (Call Me by Your Name)” by passionately kissing one of his male backup dancers.

In 2021, this move was met not with scorn but with delight, as Nas’s fearlessness was widely celebrated on social media. Hip-hop mogul Sean Combs was one of the many Lil Nas X fans who tweeted his support, leaving Nas himself in awe.

do you remember the time??? ⏳ pic.twitter.com/zA7tULXUW5