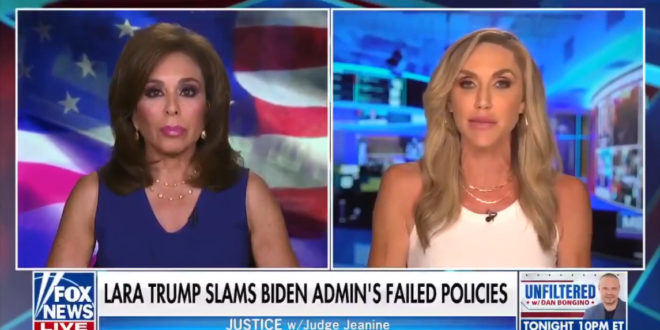 Lara Trump Calls For “Arming Up” Against Migrants

Lara Trump, former President Donald Trump’s daughter-in-law, on Saturday night urged Americans living at the southern border to “arm up” and “get guns” as she railed against President Joe Biden’s immigration policies.

In an appearance on Fox News’ Justice With Judge Jeanine, Trump, who currently works as a contributor for the network, called Biden’s border response “disgraceful.”

“I don’t know what to tell the people that live at the southern border. I guess they better arm up, get guns and be ready, and maybe they’ll have to start taking matters into their own hands,” she said. “It should never happen. These people should never make this dangerous journey here.”

Lara Trump says people who live at the southern border should get guns and take matters into their own hands pic.twitter.com/2JL30va6nF

On Fox Propaganda’s Jeanine Pirro, the ever despicable Lara trump said people living at the border should all arm up and be ready to massacre immigrants for seeking asylum.

Inciting vigilante violence would land any of us more than 20 years in jail.

But Flynn can call for a coup… no problem

Lara Trump can tell people to buy guns and shoot people at the border… no problem.

We are in the twilight zone, folks.

“I guess they better arm up and get guns and be ready. And maybe they’re going to have to start taking matters into their own hands,” Lara Trump suggesting Americans shoot Mexicans who try to cross the border. https://t.co/aBLU00JPGW

Her father-in-law asked Border Patrol if they could just, “shoot migrants in the legs” to deter them from seeking asylum.

Lara Trump is part of the exact same rot.