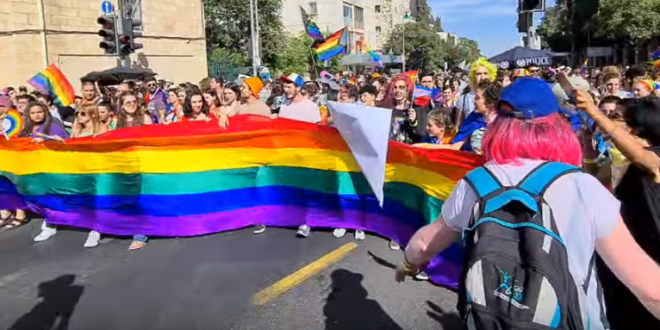 Over 3,000 police officers secured the highly charged event, six years after a deadly attack on participants. The event demanding LGBT equality began with a ceremonial prayer for Shira Banki, who was stabbed to death by an ultra-Orthodox extremist during the 2015 parade when she was 16 years old.

As thousands filled the capital’s streets, a small demonstration protesting the parade was held by members of the far-right and anti-gay Lehava organization. On Wednesday police arrested a Jerusalem resident after he threatened to kill participants at the event.

Jerusalem #Pride earlier today, which saw thousands of Israelis—Jews and non-Jews, religious and secular, LGBTQ and allies—marching through the streets of Israel’s capital. 🇮🇱🏳️‍🌈 pic.twitter.com/xMvUwGF16B

Happy to open with @hansdocter the Jerusalem March for Pride and Tolerance 🏳️‍🌈. The European Parliament declared the entire🇪🇺 an “LGBTIQ Freedom Zone.” We will continue defending human rights of LGBTIQ persons & promote equality and respect for diversity#loveislove pic.twitter.com/DKSM9tje29

Today 7,500 people gathered in Jerusalem for the #Pride Parade. After missing a year because of COVID-19, participants called for equality and celebrated the city’s vibrant LGBTQ+ community. pic.twitter.com/4WuCjRv13P

today is Jerusalem’s annual #pride parade.
It will start with a special ceremony at 3pm at Liberty Bell Park in memory of Shira Banki, a 15-year-old killed by an anti-gay extremist in 2015.
Shira’s parents Uri and Mikai will take part in the ceremony. pic.twitter.com/WepmNim034

Happy #Pride2021! Yesterday, our staff participated in the Jerusalem #PrideParade. This month, we celebrate an important message: #YouAreIncluded. Diverse experiences, perspectives, & contributions make our community stronger. Out of many, we are one. pic.twitter.com/mFCTtghuyl