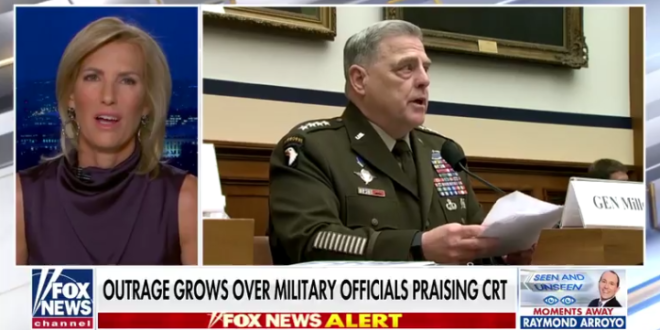 Ingraham Calls For Defunding The Military: They Want To “Weed Out Extremist Conservative Evangelicals”

“Somehow I don’t think General Milley would ever speak in this dismissive tone that he took today to his Chinese counterparts. Not the way he spoke to Congressman Waltz.

“I have a question for the General: Why would anyone risk his or her life for a country that’s systemically racist? One that brutalizes minorities. Why would any country respect us or follow our lead if that’s who we are?

“Those are some of the questions he should probably think about before he touts the value of teaching far left Marxist, racist ideology to our troops. The fact is, Milley has made his choice. And he’s chosen to indulge the radical whims of Democrats.

“We are sending our tax dollars to this military in an attempt to weed out so-called extremists, which just means conservative evangelicals as far as I can tell.

“Why is Congress not saying we’re not going to give you a penny until all of this is eradicated from the military budget? Nothing. This is my offer to you: nothing. That’s what I would say. I am totally outraged by him and his ridiculous response today.” – Laura Ingraham.

Previous Tucker Carlson Guest: Having An LGBT-Friendly Military Is Going To Bring About The Next Hitler, Stalin [VIDEO]
Next McAfee Team Posts “Q” To His IG Page After His Death