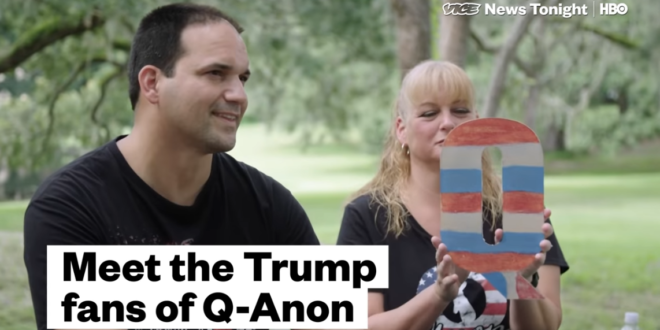 A Florida couple was arrested and charged Thursday in connection with their alleged actions during the Jan. 6 siege of the U.S. Capitol Complex. Jamie Buteau, 48, and Jennifer Buteau, 44, a married couple from Ocala, face multiple charges.

Jamie is charged separately with obstruction of law enforcement and assault, resisting, or impeding officers or employees, as he is seen on video throwing a chair at two U.S. Capitol Police officers when he was inside the capitol building.

The document reveals that at least four tipsters helped officials identify Jamie and Jennifer. One tipster, a family member, told officials that Jennifer “changed her Facebook demographics to appear as part of the Democratic party.”

Let’s run down the arrest of famous QAnon believer Jamie Buteau (and his wife Jennifer Buteau). He was featured on Vice News, in a popular HBO documentary, and in plenty of media coverage about QAnon. Not exactly incognito. https://t.co/fopKa9ds5T

NEW: Special agents from #FBI #Jacksonville have taken Jamie Buteau and Jennifer Buteau into custody on charges related to the January 6, 2021 attack at the U.S. Capitol. For updates on this and all Capitol Breach cases, look here: https://t.co/xBTaHRGBIB pic.twitter.com/ykbFBnFle6

#SeditionHunters More on #ClipperGlitch aka Jamie Buteau & his wife Jenn: when the HBO Qanon doc came out we recognized Jamie from an FBI wanted pic, but then found that the FBI used a pic of him at a Trump rally from a Tampa Bay Times story. Why we have no idea. #CapitolRiots https://t.co/z57Xwb92xH