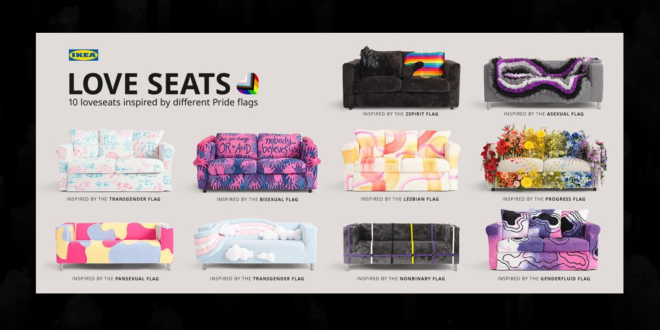 Via press release from Ikea Canada:

In honour of Pride, IKEA Canada has collaborated with designers active in the 2SLGBTQ+ community to create “Love Seats,” a series of one-of-a-kind slipcovers inspired by the colours of different Pride flags, and the lived experiences from a wide spectrum of gender and sexual identities they represent.

Throughout the COVID-19 pandemic, storytelling and personal connection have played an even more important role in bringing Canadians together. People are craving intimate, meaningful, and authentic stories that spark joy, make them think, or teach them something new.

The Love Seats serve as a platform upon which members and allies of the 2SLGBTQ+ community can feel safe to share their love stories with the world—whether those stories are about self-love, romantic love, family love, chosen love, or community love.

With the Love Seats, IKEA Canada and its collaborators hope to honour the richness and diversity of the 2SLGBTQ+ community while igniting a national conversation about identity and representation.

IKEA Canada also hopes the Love Seats inspire Canadians to feel more confident in opening up dialogues of their own. All ten Love Seat slipcovers were handcrafted by one of four designers active in the 2SLGBTQ+ community.

The above-linked release goes on to feature quotes from each of the designers about how their designs were inspired. Twitter, as always, has some opinions.

everyone is talking about how “nobody believes you” is written on the bi ikea couch but can we talk about how its COVERED IN FUCKING HANDS?????????? pic.twitter.com/dYgUAsJU8w

The Ikea pride collection is so insanely cool??? pic.twitter.com/yNfbcvrfjx

To the ppl angry abt the bi couch and claiming “biphobia”, it was designed BY a bisexual artist based on the story of a bisexual person who describes their struggle of not being taken seriously or believed regarding their bisexuality. https://t.co/Tz5mxKDN4N https://t.co/SHHso78hDj