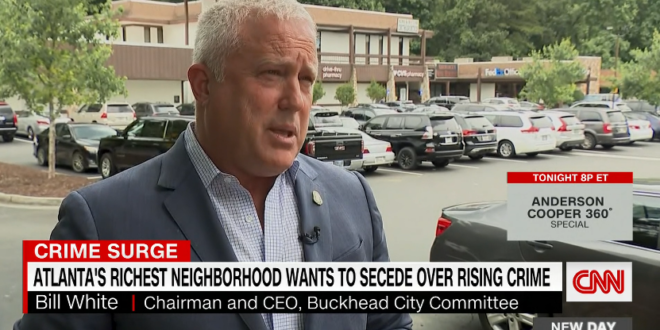 In Atlanta’s well-to-do community of Buckhead, the debate over becoming an independent city has been brewing off and on for decades. Now, amid a spike in crime, calls to split from the capital have grown louder than ever.

“We filed for divorce and our divorce is final,” said Bill White, chairman and CEO of the Buckhead City Committee, which is spearheading the efforts for the formation of the city. “We’re forming our own city, we’re establishing our own police force and we will eradicate crime.”

But critics of the split warn the consequences could be devastating: Buckhead’s departure would strip Georgia’s capital of a huge part of revenue from that tax base and the move could stoke racial divisions between the majority White community and the rest of Atlanta, a city known as the “Black Mecca” of the South.

Read the full article. Republican lawmakers have introduced a “Buckhead City” bill that may appear on the 2022 ballot.

Bill White last appeared on JMG when he launched a super PAC to unseat the ten Republican House reps who voted to impeach Trump.

You may recall the 2018 New York Times report on how White and his husband abandoned a lifetime of liberal advocacy to join the cult.

Why a Judge Has Georgia Vote Fraud on His Mind: ‘Pristine’ Biden Ballots That Looked Xeroxed https://t.co/YxfPPpR5vh

Anthony Fauci and Chinese CDC Director’s Email Exchanges Exposed: ‘We Will Get Through This Together’ https://t.co/e4EMGd6LTr