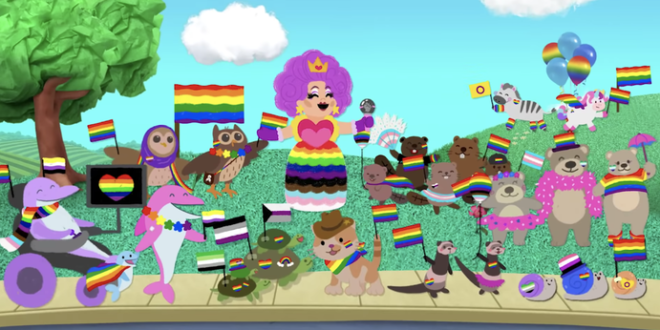 Say goodbye to the regular plot lines of Blue’s Clues and Scooby-Doo — and hello to a 21st century lesson in transgenderism, sex, homosexuality, non-binaries, and drag queens.

That’s the new reality of radical programming on some of America’s favorite shows — especially, parents are discovering, during Pride month.

Loveable animals like Arthur and My Little Pony have been commandeered by the far-Left for lessons that would make most adult’s jaws drop.

In the latest example on Blue’s Clues, real-life drag queen Nina West sings a Pride parade song to the tune of “The Ants Go Marching” — except the lyrics have been replaced with “LGBTQ buzzwords like ‘ace’ — which stands for ‘asexual’ — as well as ‘queer,’ ‘bi,’ ‘pan,’ ‘allies,’ and ‘kings and queens,'” the Blaze warns.

Blue and friends watch their two-mom floats go by while rainbow and transgender flags dot the colorful landscape. This is just the beginning of Nickelodeon’s full-blown assault on mainstream morality.

Like so many other Netflix and PBS shows, producers seem dead set on turning wholesome, family-friendly stories into a weapon of indoctrination. And they’re doing it under the guise of children’s programming.

Watch the clip. It’s adorable. Nickelodeon has turned of comments at YouTube, no doubt due to vicious abuse by God’s gentle people.