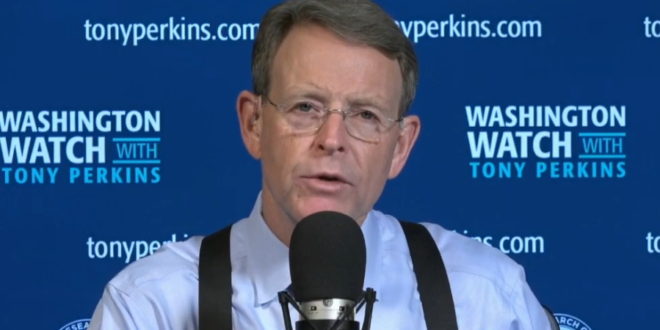 A handful of days into this rainbow deluge, the air of LGBT pride is so suffocating that people could choke. It’s plastered across social media, corporate logos, cereal boxes, even big box stores’ pandering displays.

This month, fans can’t even go to a San Francisco Giants game without being bombarded with the league’s first Pride-color uniforms.

But one place conservatives thought they were safe from all this nonsense was the Republican National Committee. Turns out, their chairwoman is just as happy as anyone to pull on the LGBT jersey.

It wasn’t the smartest thing RNC Chairwoman Ronna McDaniel has ever done. At a time when dozens of states are racing to stop LGBT extremism, the last thing any political strategist would advise is pitting yourself against them.

And yet, that’s exactly what McDaniel did on Wednesday when she tweeted, “Happy Pride Month! The GOP is proud to have doubled our LGBTQ support over the last four years, and we will continue to grow our big tent by supporting measures that promote fairness and balance protections for LGBTQ Americans and those with deeply-held religious beliefs.”

If McDaniel was looking for a way to end her party’s record-breaking fundraising, she nailed it. Right now, there are few things she — or any Republican — could have said that would have been more tone-deaf and offensive than applauding the woke agenda her base is trying to combat.

In case the RNC hasn’t noticed, there’s a wave of red states in line trying to cut off the same gender extremism the RNC is intent on supporting. Most Americans — and that includes a good number of Democrats — are sick of the transgender assault.

They’re tired of being force-fed radicalism that denies reality on everything from Blue’s Clues to Fruit Loops. They’re not sitting at home celebrating the movement that’s robbed us of girls’ sports, children’s privacy, women’s rights, and free speech.

They’re not sprinting to Twitter to applaud a cause that’s suspending Christian teachers, rewriting the English language, and advancing its agenda on the backs of mutilated teenagers’ bodies.

The reality that McDaniel — and any other Republican tempted to stray on this issue — need to understand is that the idea of “fairness” sounds great in a tweet, but religious freedom is being endangered by extremists who don’t actually want it.

They’re demanding forced acceptance (and punishment for the non-conformists) everywhere from elementary classrooms to corporate board rooms and anything in between. And that’s not going to change no matter how many rainbows the Republican Party flies.

So until the RNC gets its act together and decides to represent real conservative values, my advice is this: send your hard-earned dollars directly to candidates who have a track record of fighting for the principles you believe in.

Look for men and women who won’t compromise when it comes to free speech, religious freedom, and common sense. We should have no part in supporting organizations that think they can play Eeny, meeny, miny, moe with our First Freedoms.