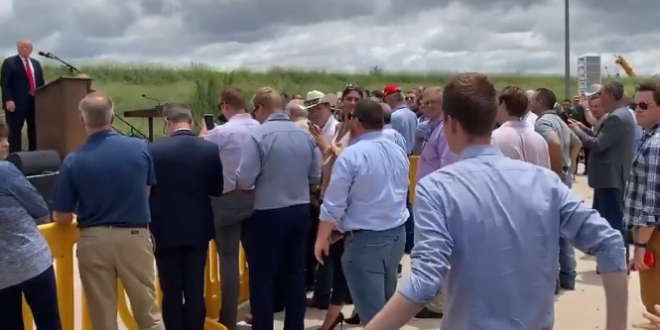 CNN’s Jim Acosta was booed by a crowd gathered at the southern border during former President Trump’s visit there on Wednesday after he asked Trump to apologize for the Jan. 6 insurrection. “Will you apologize about Jan. 6?” Acosta shouted to Trump after he concluded his speech near a section of border wall.

“Nooooo,” several people in the crowd, made up of mostly Republican members of Congress and staffers, shouted back at Acosta. Some in the crowd began to boo the former White House reporter-turned-weekend anchor. After the crowd shouted him down, Trump looked in Acosta’s direction, smirked and gave a thumbs up.

At border event with Trump and Abbott I asked Trump if he’s going to apologize for January 6. He did not respond. Crowd of mostly GOP members and staff booed.

.@Acosta gets booed by GOP congressional members after shouting to Trump if he will apologize for January 6th at the conclusion of his speech by the border wall. pic.twitter.com/eJtVIc8gIs