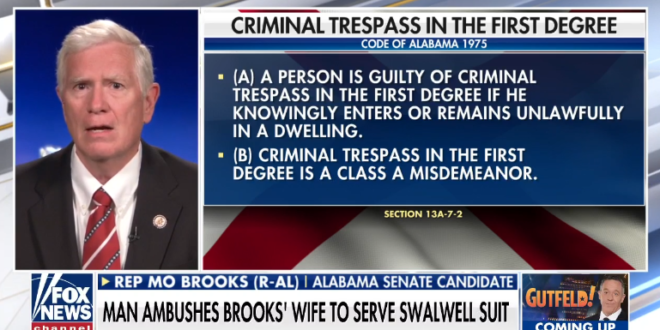 GOP Rep Runs To Fox To Whine About Process Server

“First and foremost, this is a frivolous politically motivated lawsuit. There is no liability on the part of myself or President Trump — although I probably stand with President Trump as we defend this frivolous litigation,” said Brooks, who is also running to succeed retiring Sen. Richard Shelby, R-Ala., next year.

“Instead, they chose to hire a process server that would chase my wife down as she’s coming home from church, keeping in mind that she’s a grandmother with ten grandchildren and there could’ve been some of those grandchildren in the car with her when this transpired. And then illegally entered my home.”