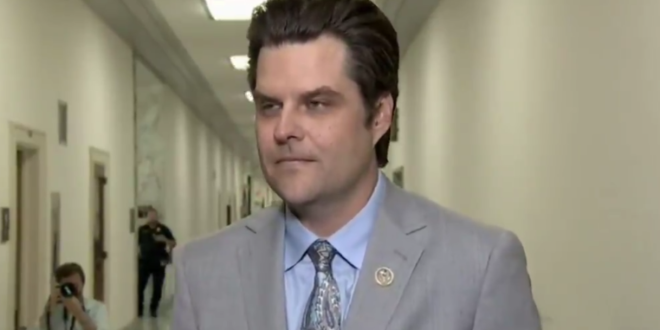 “I would love to be able to share all the people in my life that I talk to and don’t talk to, but unfortunately the people in your profession have doxxed, harassed, threatened people that have been in my life.” – An extremely haggard-looking Matt Gaetz, refusing to say if he’s talked to his ex-girlfriend since it was reported that she’s cooperating with prosecutors. Earlier this week it was revealed that the feds are looking into a potential obstruction of justice charge against him.

Reporter: “Are you concerned you’ll be indicted?”

Previous Trump Rages Over Latest Facebook Ban: Zuckerberg Won’t Be Invited To Dinner When I’m Back In The WH
Next Grifter Milo: Now That I’m Ex-Gay, Dogs No Longer Bark At Me, That’s How God Revealed Himself To Me [VIDEO]