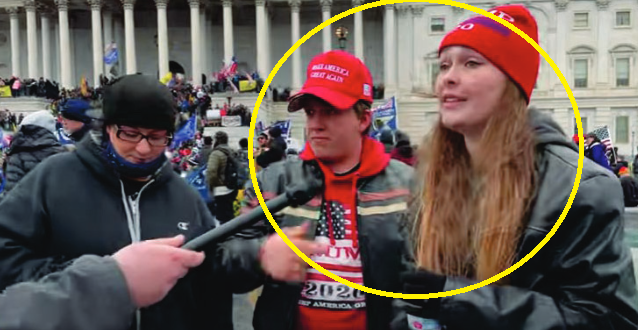 Federal prosecutors have charged two additional defendants over their alleged roles in the Jan. 6 attack on the U.S. Capitol Complex. Savannah McDonald, 20, and Nolan Kidd, 21, stand accused of four separate offenses with a combined potential punishment of three years in prison if convicted for the full suite of crimes.

An individual asked Kidd, ‘Why did you remove your pics,’ to which Kidd responded, ‘The FBI are trying to identify anyone that inside and press charges.’”

McDonald and Kidd both allegedly engaged in some unrepentant boasting about their role in the right-wing riot, going so far as to dub themselves “FUCKING STORMTROOPERS” who “did the right thing.”

Court docs say McDonald said on Snapchat: “I’m the only girl to make it into the Senate”.. and Kidd say the pair were “f**ing stormtroopers”

Pair were allegedly among first 100 to enter Capitol on Jan 6 pic.twitter.com/vkmSc4bLno

CAPITOL RIOT ARREST UPDATE:
*Savannah McDonald & friend Nolan Kidd of Georgia are charged in the insurrection.
*He deleted FB photos, but still texted some to a friend. Which the FBI seized.
*She: “I’m the only girl that made it into the Senate.” (Nope.)https://t.co/2iWZxxrhl9 pic.twitter.com/uZUHv0u3Cr

Previous Texans Begged Once Again To Conserve Energy [VIDEO]
Next Tony Perkins: Pentagon’s Push To Weed Out Extremists Is Meant To Intimidate Conservatives And Stifle Speech