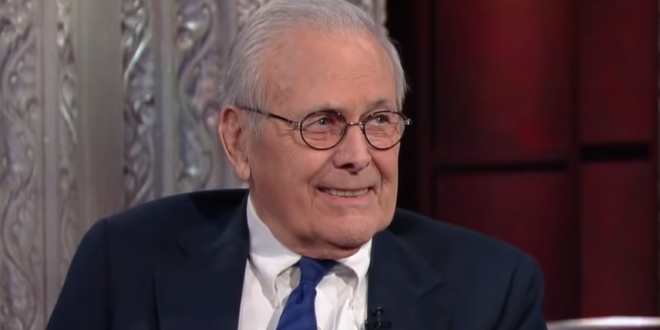 Donald H. Rumsfeld, the secretary of defense for Presidents Gerald R. Ford and George W. Bush, who presided over America’s Cold War strategies in the 1970s and, in the new world of terrorism decades later, the wars in Afghanistan and Iraq, died on Tuesday at his home in Taos, N.M. He was 88. The cause was multiple myeloma, said Keith Urbahn, a spokesman for the family.

Encores are hardly rare in the Washington merry-go-round, but Mr. Rumsfeld had the distinction of being the only defense chief to serve two nonconsecutive terms: 1975 to 1977 under Mr. Ford, and 2001 to 2006 under Mr. Bush. He also was the youngest, at 43, and the oldest, at 74, to hold the post — first in an era of Soviet-American nuclear perils, then in an age of subtler menace by terrorists and rogue states.

Hailed initially for leading the U.S. military to war in the wake of the Sept. 11, 2001, terrorist attacks, Mr. Rumsfeld’s handling of the Iraq War eventually led to his downfall. Widely criticized for poorly planning the invasion’s aftermath, he was slow to recognize the development of an insurgency, draft an effective strategy for countering it and set clear policy for the treatment of prisoners.

BREAKING: Donald Rumsfeld, the two-time defense secretary whose reputation as a skilled bureaucrat and visionary of a modern U.S. military was soiled by the long and costly Iraq war, has died at age 88, his family says. https://t.co/1eCjLJ6A8l

Liza Minnelli has outlived Donald Rumsfeld who served as Defense Secretary Under 2 Presidents. Rumsfeld was in charge of the invasion of Iraq and inexplicably said that the removal of Saddam Hussein had “created a more stable and secure world.”

Donald Rumsfeld dies at age 88. The defense secretary during 9/11 was known as the architect of the Iraq war. https://t.co/ybSt3VAulU pic.twitter.com/7Hjt7z5cLC

Previous FBI Arrests YouTuber In Capitol Riot, Asks Trump To Pay His Legal Defense: “This All Happened Because Of You”
Next 190 GOP Reps Vote Against Riot Select Committee