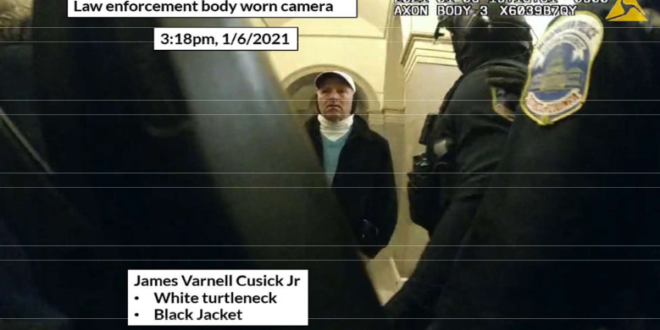 Florida Pastor And His Pastor Son Arrested In DC Riot

A Florida pastor, his son and a churchgoer have been charged in connection with the riot at the U.S. Capitol after authorities received tips and saw the men on security footage inside the building on Jan. 6.

Seventy-two-year-old Pastor James Cusick of Global Outreach Ministries in Melbourne, Florida, and his son, Casey, who is also a leader at the church, were arrested on Thursday, according to the Department of Justice.

David Lesperance, the director of an air conditioning contracting business who authorities say is a congregant of the church, was also arrested. All three men have been charged with knowingly entering or remaining in a restricted building without lawful authority, disorderly or disruptive conduct and “violent entry and disorderly conduct on Capitol Grounds.”

In late January, the FBI received an anonymous tip that James was inside the Capitol rotunda during the Capitol attack, prosecutors said. On March 26, the agency received another tip from a different individual alleging that both James and his son Casey had traveled from Florida to Washington, DC, to attend then-President Donald Trump’s rally.

The tipster said the pair was accompanied by another individual, “known to law enforcement” as David Lesperance, and the three had entered the Capitol during the riot and taken videos and pictures, according to charging documents.

Lesperance also acknowledged he took videos and photos while inside the Capitol but told authorities he later deleted the media fearing repercussions, according to legal documents.

A Florida man admitted storming the Capitol, feds say. Then he told the FBI his pastor had come with him. https://t.co/MXKl0ZGxgI