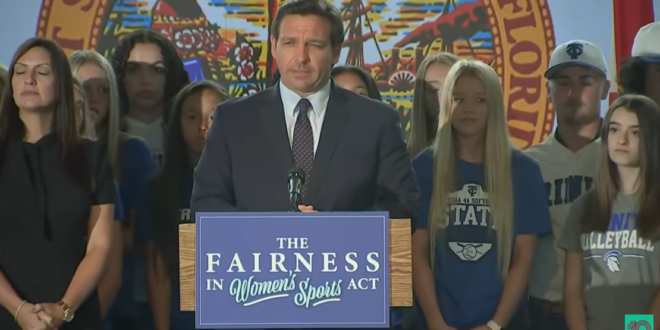 The governor signed the bill, which includes the Fairness in Women’s Sports Act, during a news conference at Trinity Christian Academy in Jacksonville.

Under the new law, a transgender student athlete would have to affirm her biological sex by supplying proof such as a birth certificate.

Read the full article. The bill was approved back on April 28th so signing it today was not a coincidence.

Appalling. First day of LGBTQ Pride Month and @GovRonDeSantis signs SB 1028 which bans trans kids from school sports. FHSAA has allowed trans kids to participate in FL since 2013 with ZERO problems. This fuels transphobia and puts vulnerable kids at risk for no good reason.