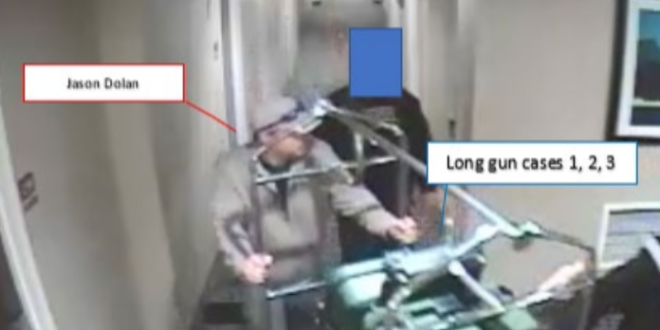 And the hits just keep coming:

Federal prosecutors argued in court papers on Tuesday that a magistrate judge was wrong to allow a a 20-year Marine veteran charged in the Oath Keepers conspiracy case to get out of jail ahead of trial. The government argued that 44-year-old Jason Dolan — a Marine marksmanship instructor for a decade — is too dangerous to let out.

In the latest filing, prosecutors devoted an entire section to a The Gateway Pundit interview of an anonymous Marine veteran from May 24.

The magistrate judge said the government previously fell short in proving that the veteran was Dolan, but this time prosecutors claim they can show it was Dolan who espoused a “conspiracy theory” about police opening “magnetic locks” to let him and others into the Capitol.

4 more Oath Keepers indicted in connection with the Jan. 6 insurrection:

All are charged with federal offenses:https://t.co/u08O8OnRVM

Here is the full motion, along with a prior detention motion, transcripts of Dolan’s detention hearing (spread over 2 days) and a transcript of the Gateway Pundit interview. https://t.co/7oV2ldVh6F

In a new filing, the DoJ said it believes Oath Keeper Jason Dolan hid multiple firearms — including one he gave to his 7 year old daughter — as well as an Oath Keeper t-shirt, gloves & a gaiter he wore into the Capitol on Jan. 6, all in an effort to “delete or secrete evidence” pic.twitter.com/ko8jbPfV2n

Here are the pics the DoJ included to show Dolan and Harrelson with what it claims are gun cases on a cart in the hotel. pic.twitter.com/mB1TOsqqiB

Prosecutors also say Dolan gave an anonymous interview to Gateway Pundit in May claiming someone inside the Capitol released magnetically locked doors, allowing the crowds into the building.

This is the interview: https://t.co/woWF1EGpJF