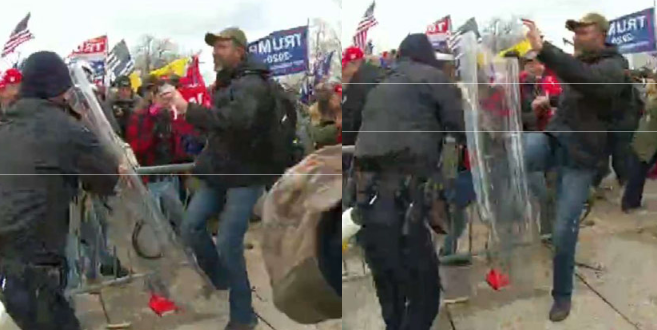 Another Georgia man has now been charged in connection to the January riot at the U.S. Capitol. Kevin Douglas Creek, 46, of Johns Creek was arrested Wednesday, according to the Department of Justice.

According to court documents, Creek was caught on body camera hitting an officer just before 2:30 p.m. on January 6. Court documents say that just a minute later, Creek can be seen kicking another officer in the West Terrace of the U.S. Capitol Building.

Kevin Douglas Creek, 46, of Alpharetta, GA was arrested Wednesday by #FBI Atlanta for Assault on a Federal Officer at the U.S. Capitol on January 6, 2021. https://t.co/DARVwnSJol pic.twitter.com/pMsN68V4yY

Another day, another accused Capitol rioter charged with assaulting police.

He joins 130+ accused of assaulting or resisting authorities on Jan. 6th. pic.twitter.com/ZpkZTsD6WZ

He is among the more than 465 people who have been arrested to date for their alleged involvement in the Capitol riot. https://t.co/rvRnL1EiTT via @HuffPost