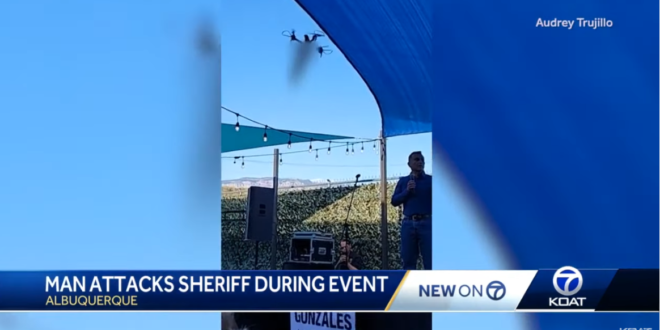 It’s the second time the “Dongcopter” — complete with its own Twitter account — has harassed a New Mexico politician in recent days. Bernalillo County Sheriff Manuel Gonzales III, who was not injured, brushed off the brazen Tuesday night stunt as the work of “political operatives,” according to The Albuquerque Journal.

The incident, which was partially captured on video, happened as about 70 people gathered to hear the Democrat speak at the Revel Entertainment Center, the paper said.

Deputies later identified him 20-year-old Kaelan Ashby Dreyer, and said he was “swinging his balled up fist at Manuel Gonzales III,” yelling “He’s a tyrant!” and at one point managed to strike the mayoral candidate. Dreyer was booked into jail later that night on misdemeanor charges of battery and obstructing an officer.